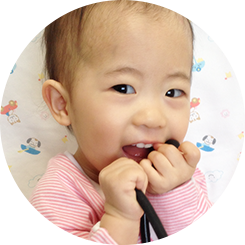 ◎November 12, 2013
Born in Sapporo City hospital with her twin Sumire.
Because they were super premature, they were not discharged from the hospital until February 2014.
◎ June 30, 2014
A few months after being discharged, Sumire comes down with a strong cold,
After numerous trips to the hospital she would unfortunately succumb to her illness and pass away, after a much too brief life of only 270 days. The next day, Tamaki was diagnosed a disease of the heart known as “dilated cardiomyopathy”.
She would immediately undergo treatment at Hokkaido University Hospital.
◎September 2014
She was transferred to Osaka University Hospital
◎August 2015
Her cold turned into asthma, a result of the artificial breathing machine unit.
◎October 15, 2015
Underwent surgery to have ventricular assist device implanted
◎November 12, 2015
Celebrated her 2nd birthday
◎November 27, 2015
Follow-up surgery to implant a pacemaker
◎February 27, 2016
Receive echo cardiac catheterization test results, right-chamber of the heart is significantly weakened.

Currently, little Tamaki, has been able to live with the aid of the pediatric ventricular assist device.
However, this is only a temporary solution, a full heart transplant is needed to ensure her long term survival.

Cardiomyopathy (literally “heart muscle disease”) is the measurable deterioration for any reason of the ability of the myocardium (the heart muscle) to contract, usually leading to heart failure. Common symptoms include dyspnea (shortness of breath) and peripheral edema (swelling of the legs). Those with cardiomyopathy are often at risk of dangerous forms of irregular heart rate and sudden cardiac death.[1] The most common form of cardiomyopathy is dilated cardiomyopathy.[2][3] Although the term “cardiomyopathy” could theoretically apply to almost any disease affecting the heart, it is usually reserved for “severe myocardial disease leading to heart failure.”